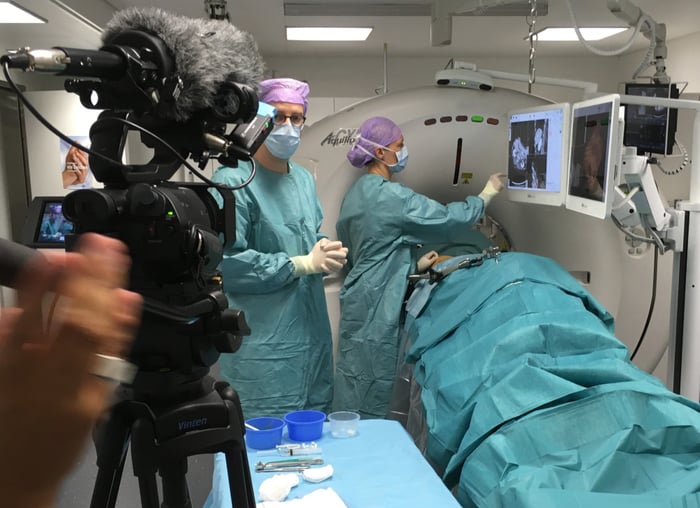 What is the future of medicine? To answer that question a film team of German TV station HealthTV visited Inselspital and CAScination on 3 July. During their visit in Bern they were able to see for themselves that the future of medicine has already begun and will bring major improvements for patients.

The procedure is gentle for the patients. The time under anaesthesia is relatively short, the procedure is minimally invasive, so that no large wounds remain. Patients usually can leave the hospital shortly after the intervention. In addition, the radiation exposure during the entire procedure is significantly lower than with comparable treatments.

During the shooting in Bern, both an intervention at the Inselspital and interviews in the offices of CAScination were filmed. After completion of production and editing, the five-minute report will be shown on the German TV channel HealthTV and on its YouTube channel. The documentary is scheduled for Autumn 2018. We will inform you of this.


CAScination AG is an award-winning medical technology company dedicated to development, manufacturing and commercialization of innovations in computer-assisted and image-guided surgery. Our trailblazing navigation systems and surgical robots are designed to improve outcomes for patients undergoing surgical or interventional procedures and offer new perspectives to patients worldwide. Our CAS-One planning and navigation system is used to treat patients suffering from soft tissue cancer (e.g., liver cancer) by many hospitals across Europe, and we are developing further applications in a number of disease areas.