Recently, Quality Ablation from CASCINATION was introduced in CHU Dijon (France) to the Interventional Radiology team (Led by Prof. Romaric LOFFROY). There was significant interest in the technology with the main goal to bring more certainty for their tumor ablations in the liver and kidney, and to enable more complex procedures to be done in the same amount of time, with the same workflow.

At the end of October, the first ten liver patients had been treated, and then the team was ready to move into kidney ablation with CAS-One IR. 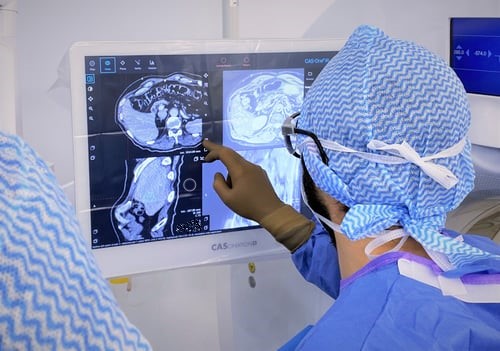 Dr. Kevin GUILLEN uses the MRI / CT fusion capability to be able to plan and navigate an "invisible" lesion

The navigation step of CAS-One IR

In Dijon, Cryoablation (from Boston Scientific) has been chosen as a reference treatment for kidney cancer. Cryoablation causes direct cell injury that is based on two biophysical changes. The first is osmotic dehydration of the cells, which occurs due to the extracellular propagation of freezing and an increase in the solute concentration outside the cell. The second mechanism is the formation of intracellular ice, which occurs when the reduction of the temperature is sufficiently rapid to trap water within the cell and there is not enough time to respond osmotically to this effect.

Also, compared to surgery, ablation takes less time and utilizes fewer hospital resources. Doing the ablation with CAS-One IR not only gives clinical benefit, but can enable the duration of the procedure to be very reliable and consistent – enabling the utilization of interventional suite to be maximized.

By coincidence, it was on World Radiology Day, (8th November) that they did the first kidney case using CAS-One IR alongside cryoablation.

With this specific case, since multiple needles were needed, the planning of trajectories and simulation of estimated ablation volume was important.

The 66 years old female patient already had a nephrectomy in 2006 on the left side, so the approach now is to be conservative in order to reduce the risk of permanent dialysis and preserve the renal function. This also made achieving sufficient margin critical as recurrence would be very dangerous. 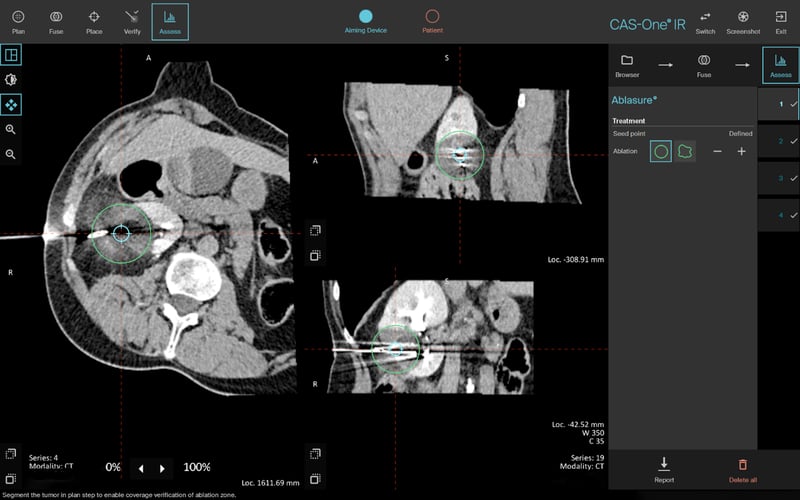 Needles were inserted thanks to the guidance of CAS-One IR with a CT verification scan for each one. Puncturing the kidney sometimes results in movement – so a fast needle insertion is key in this procedure, and special attention should be paid to the CT verification scans.

After 10 minutes of Cryoablation with the 4 needles bracketing the tumor, and few minutes of cooling before removing the needles, the procedure was complete. Then, The ablation confirmation scan was done (needles in place) showing an adequate coverage of the initial tumor zone. A sufficient safe kidney volume on the upper part is clearly visible to maintain renal function. 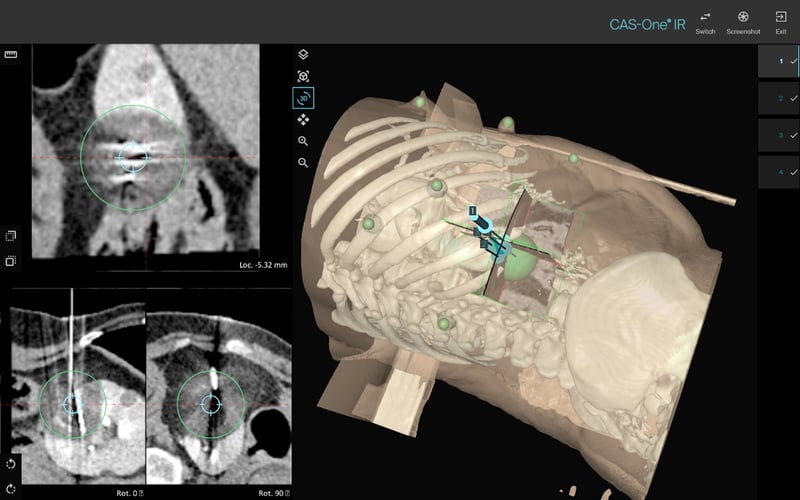 After this successful case, the team is ready to move on to more kidney cases with CAS-One IR.

One of the first cases (liver) done in CHU Dijon with Prof. Romaric LOFFROY and team. Just visible on the left screen is the histogram of AblaSure – showing a quantitative measurement of the ablated tissue.

The team at CHU Dijon now has CAS-One IR fully integrated into its workflow, and 80-100 patients a year will benefit from the technology. They hope to do research on some specific benefits soon and are already generating ideas on interesting, impactful topics.